Looking for more warm, breakfast recipes? Then you have to check out these Honey Buttermilk Biscuits with Roasted Strawberries.

If you've gotten bored with frozen breakfast waffles, this recipe is the remedy! I've always been partial to pancakes but Brown Butter Waffles with Cinnamon Apples have me second-guessing my stance.

What makes these waffles superb is the inclusion of brown butter. If you've seen my recent recipe for Easy Browned Butter Banana Nut Muffins, then you know I've been experimenting with browned butter lately.

All you need is an extra five minutes to enhance your next meal. Brown butter is regular butter cooked on medium-low heat for an extended amount of time. Brown butter adds a rich, nutty depth to the waffles. And it just pairs so well with the buttery, sweet cinnamon apples!

The end result is crisp waffles with a fluffy center and a tasty apple topping. It's a great start to your day!

Before we mix and make our waffles, we need to prepare our cinnamon apple topping, it's very similar to my apple pie filling recipe. First, cut thin slices of apple and add them to a small saucepan. Then add sugar, cinnamon, butter, vanilla extract, and just a pinch of salt.

Now cook over medium-low heat until the apples are slightly soft. Make sure they aren't mushy. Remove them from the stovetop and set them aside.

how to make brown butter waffles

First, preheat your waffle iron. Now, make the brown butter for the waffles by adding ¾ cup of butter to a skillet over medium-low heat.

The butter will become foamy and begin to bubble. Keep an eye on it, stirring occasionally. When the foam begins to turn brown and you see brown specks on the bottom of the pan, remove the butter from the heat. Allow it to cool for 5 minutes before combining with the other ingredients.

Then combine eggs, milk, sugar, and vanilla extract in a large bowl. Whisk together until frothy. Now slowly pour in browned butter. Whisk constantly until the butter is fully incorporated into the mixture. Add a pinch of salt, flour, and nutmeg.

Next, fold the ingredients together using either a flat spatula or spoon. Then spray the waffle iron with nonstick spray and add the batter. Cook the waffles according to your manufacturer's instructions.

Finally, add cinnamon apples on top of the waffles and enjoy! 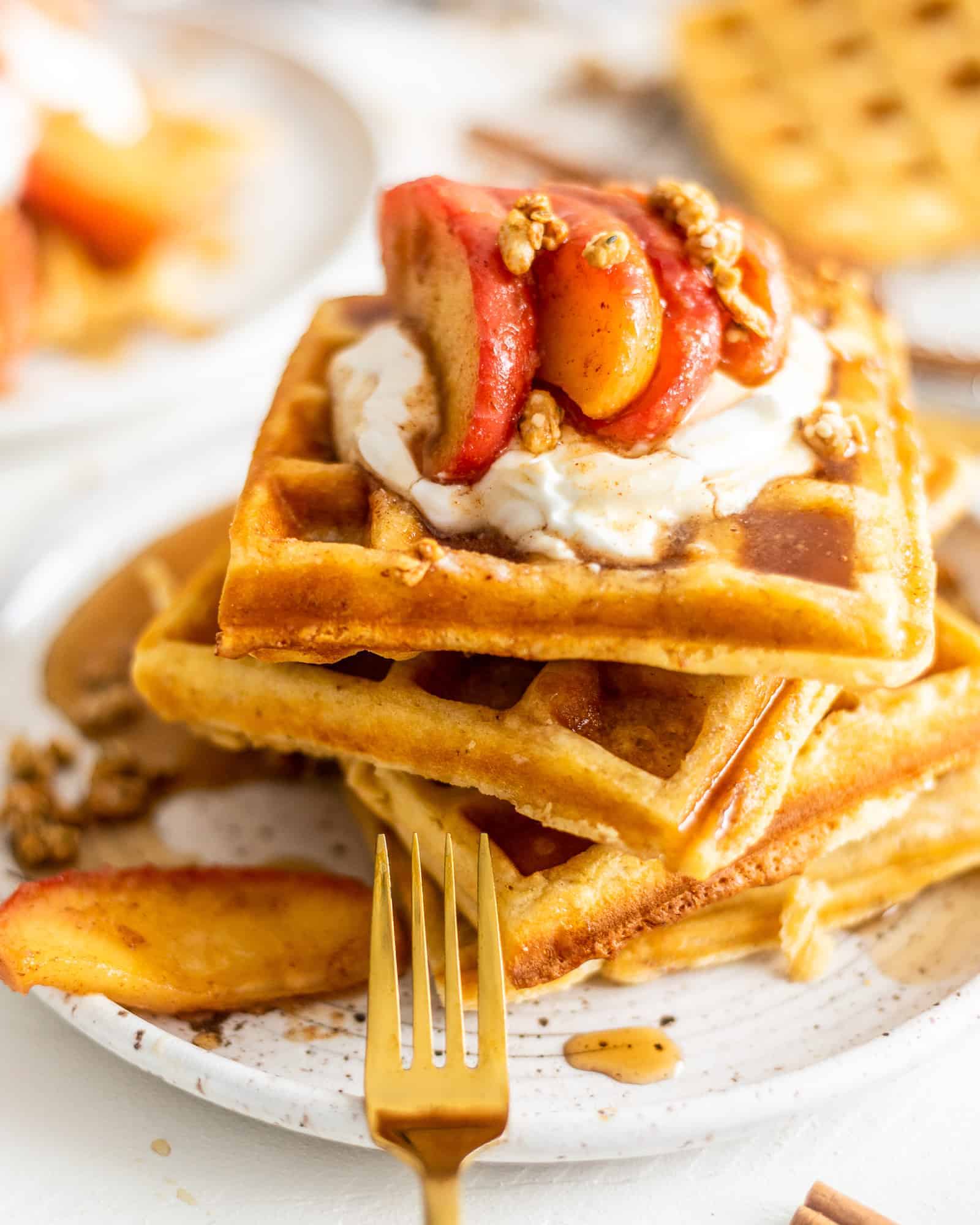