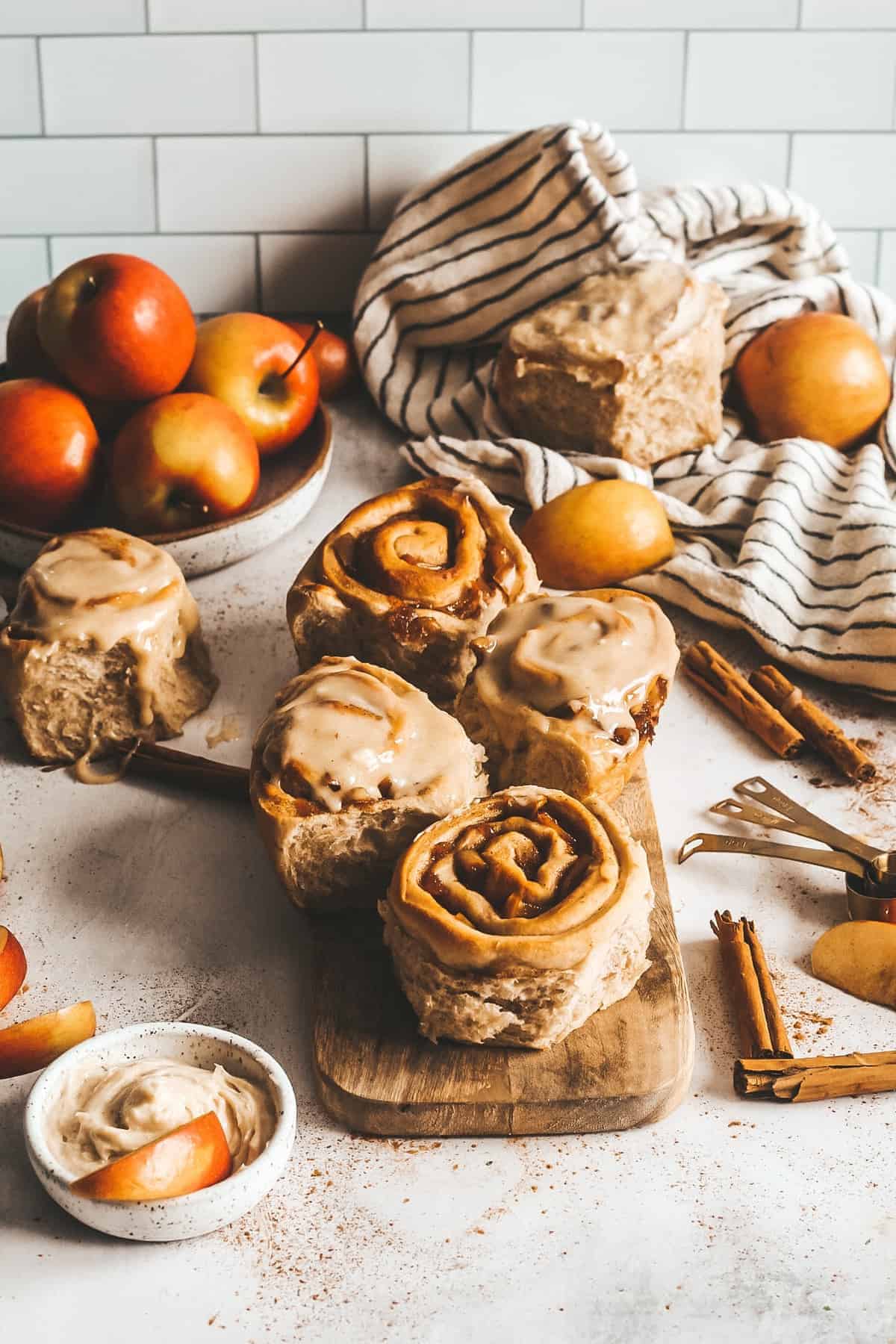 Apple Cider Cinnamon Rolls with Browned Butter Frosting is my first official recipe for Fall. Although we're still a few days out from the official Autumn Equinox, it's 48 degrees this morning and I have already taken out my fluffy sweaters and jackets. Thus, it is Fall. And what does Fall mean? Apple picking and buying apple cider from your favorite orchard!

This recipe is one of those recipes that truly WOW your taste buds. These apple cider cinnamon rolls have a super soft and buttery taste with a jammy apple filling. Then the frosting on top is simply to die for. It's creamy and sweet and with the browned butter and cream cheese - you honestly can'y go wrong!

Every year, my family and I go apple picking. It's been a tradition ever since I was a child. We hop in the car and drive about an hour to the orchard and pick a few bushels of apples and then have a huge dinner afterward. However, the fun doesn't stop there. I love tasting all of the apples and using them to make different dishes, savory and sweet!

To make the dough, you simply combine all of the ingredients in the a stand mixer with the dough hook attachment. Allow the dough to knead for about 8 minutes. It should be soft and smooth. Add dough to a well oiled bowl and cover with a towel and let the dough rise in a warm place. (As of late, I've been using the oven with the light on and it works phenomenally every time!)

While the dough is rising, let's make the filling. Chop up three honey crisp apples and add them to a large sauce pan. Also add in some butter, brown sugar, a pinch of salt, and a little apple cider for good measure. Bring this mixture to a boil and them simmer until the apples are soft and jammy. Add a little cornstarch and let the mixture thicken and cool.

Once dough is done rising, roll out onto a floured work surface into a 12 x 18 rectangle. Cut off any excess uneven sides. Spread the apple filling across the dough rectangle and then begin to roll lengthwise making a long log. Cut into 1.5 inch pieces and add to a baking pan or cast iron pan. Cover with a towel and let rise again for 30 minutes. Bake for 22-25 minutes and let cool.

To make the browned butter frosting, it's quite simple! Brown the butter stove top over medium heat and then reduce to low when butter starts to brown. Add to a mixing bowl or stand mixer and add powdered sugar, vanilla, and cream cheese and mix until smooth! Slather the frosting over your cinnamon rolls and eat up!

Be sure to bookmark these Apple Cider Cinnamon Rolls. It will be the best cinnamon rolls you've ever had! 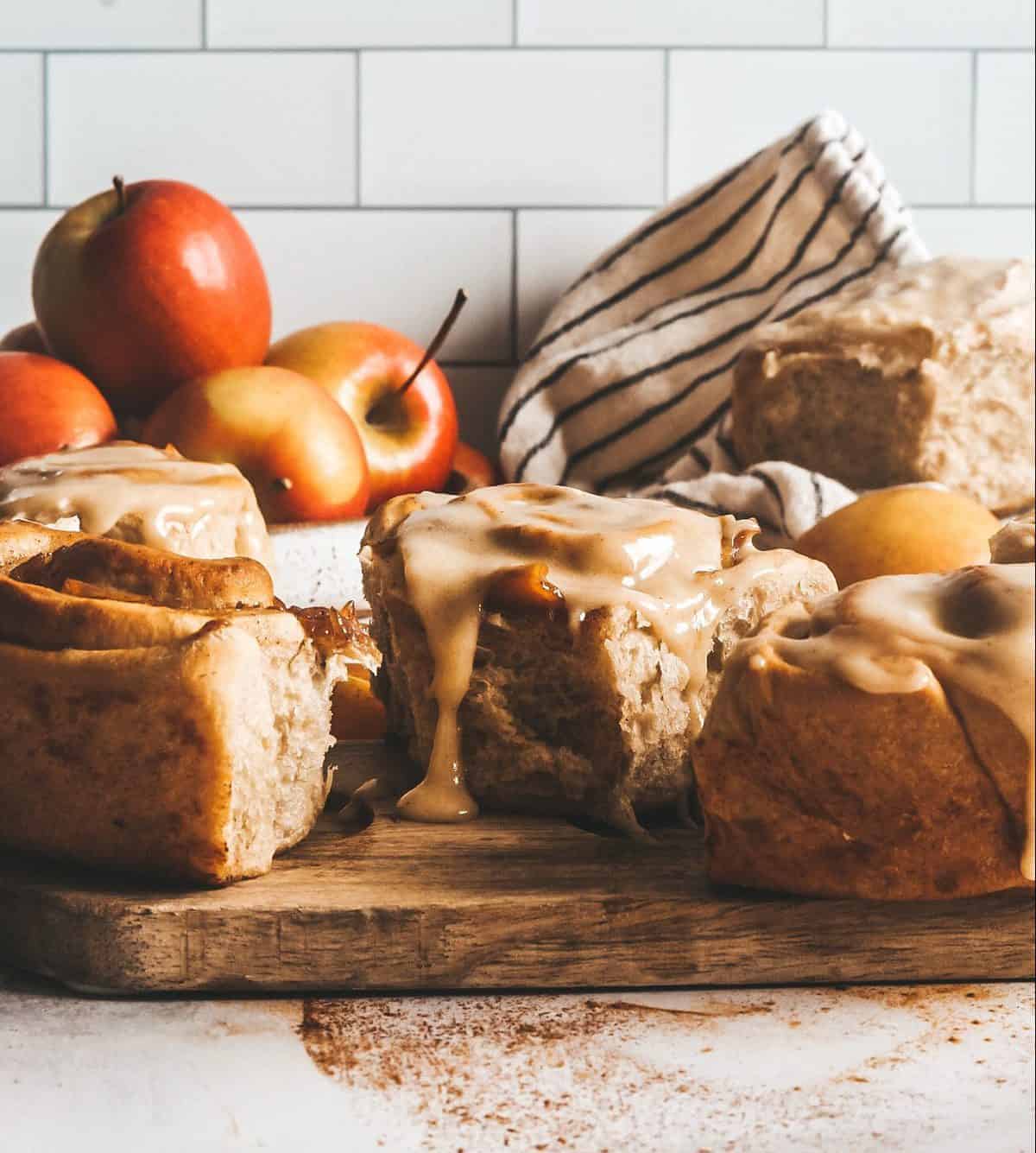 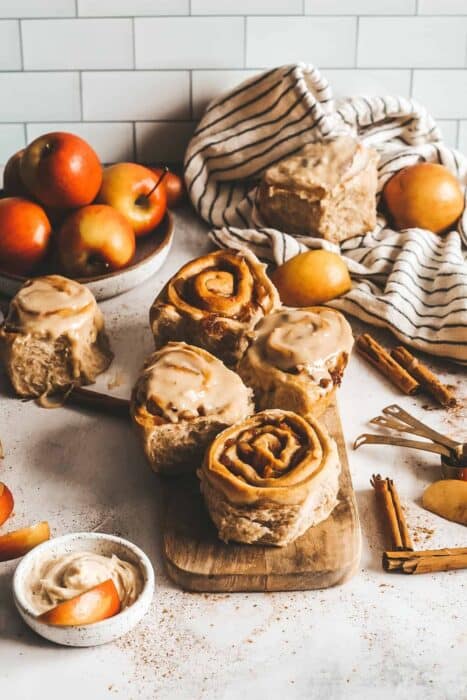