Cinnamon Pear Apple Crisp is an easy and delicious dessert that combines warm cinnamon spices, soft pears, granny smith apples, and topped with a buttery brown oat crisp. Make this dish for any occasion and enjoy with ice cream and even a little caramel drizzle!

I can't remember the first time that I had apple crisp, but I do always remember enjoying it. It's simple, easy to make, and always such a treat. I put my own little spin on a traditional apple crisp by adding pears to make this Cinnamon Pear Apple Crisp.

The pears add a really awesome flavor and texture. The pears cook down a bit more than the apples so you have a nice juxtaposition between soft pears and chunky apples. I also added in some vanilla extract, cinnamon, lemon juice, and nutmeg to make this dessert POP. Everything comes together so easily, you'll be making this recipe over and over!

What type of apples do i need?

You can really use whatever kind of apples you like. I used granny smith apples, however, you can also use honeycrisp apples too. I've heard fuji apples are great to use as well, just to name a few.

Feel free to get creative and experiment with whatever types of apples you like. This is a true no-fail recipe so have fun with it!

Do i need to peal the apples and pears?

Nope! I didn't! But you definitely can. It's up to your personal preference. Kinda the same way with my Spiced Pear and Almond Cake. In my opinion, without the skin, the pears and apples kind of become mushy when they're cooked down. If that's your thing and you enjoy it, then by all means - peel them!

For me, it's easier to just chop them, toss in the spices, and bake. But it's all up to you and what you like!

How do you make cinnamon pear apple crisp?

hen add the butter. Ensure that your butter is at room temperature. Smoosh together with your hands until butter is incorporated and texture resembles wet sand. Put in the refrigerator until you're ready to use.

Then, chop up the apples and pears. Add to a big bowl then squeeze the juice of one lemon on top. Add brown sugar, cinnamon, nutmeg, pinch of salt, and vanilla extract.

Toss together to ensure all of the fruit is coated in the spices and brown sugar. Add to a 9-inch pie pan and top with oat crisp topping. Bake for 35-40 minutes, until the top is golden brown. Let the Cinnamon Pear Apple Crisp cool for about 10 minutes. Then dig in!

What do you serve with cinnamon pear apple crisp?

My favorite thing to eat with Cinnamon Pear Apple Crisp is ice cream topped with a little homemade salted caramel sauce! It's almost like have apple pie a la mode but far easier to make! You can also top all of that with some sea salt caramel for a really decadent treat. It's so delicious.

Conversely, you can eat this dish all by itself too. It really doesn't need anything, but the addition of ice cream is AMAZING.

The recipe and blog post for this Cinnamon Pear Apple Crisp was made in partnership with Minerva Dairy! I received compensation in exchange for this work. My opinions on their butter is genuine. If I didn't love their products, I would certainly mention it! Thanks for your continued support! 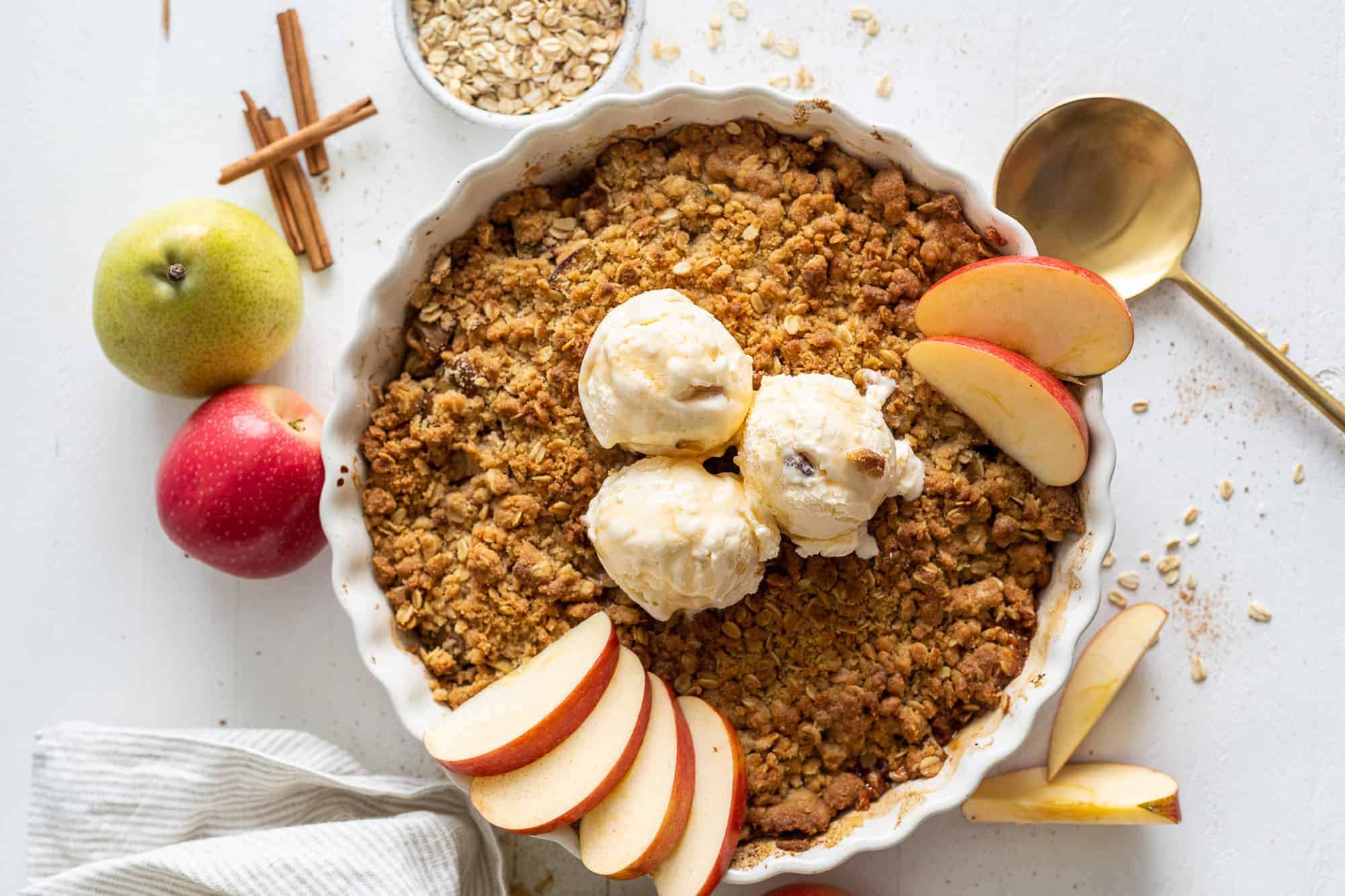