Brown Butter Garlic and Herb Mashed Potatoes is the mashed potato recipe you've been looking for but couldn't find! Well, it's here. Finally. This recipe is SO good and very simple. I'm not sure what makes this recipe so good, but for starters, I think it's the combination of brown butter and sour cream. Also garlic. Lots and lots of garlic. lol In addition, there's a bit of onion powder and tons of fresh herbs. When you combine these into one with beautiful golden potatoes, a flavor explosion happens. Also, these are super easy to make. Which other than the flavor, is the best part.

Do you typically make mashed potatoes for the holidays? It's funny because so many people do. In my home, mashed potatoes was always more of a side for casual dinner and we saved sweet potato casserole for big holiday dinners. Since Hubby and I are staying home, I've been experimenting with different foods. I made these potatoes in preparation of Thanksgiving. I just wanted to see if I could make mashed potatoes taste a bit better. If ever there is such a thing. Anyway, I achieved it. A rich and creamy mashed potato recipe that I would be proud to serve at a holiday dinner.

Then I went on to try yukon gold potatoes. THESE mashed potatoes got SO. Freaking fluffy. They were light and airy and just so perfect in texture. Also, they mashed well and didn't take as long to boil. As far as taste is concerned, they were creamy and smooth. All components that you want in mashed potatoes.

At this point, I think that I found a winner, but wanted to be sure. I then mixed together half yukon gold and half russet potatoes. It was good, but a bit too starchy. I'm not sure what went wrong here or why but I just wasn't a fan. Perhaps the Four Level Food Scientist can assist. lol

So there you have it. Yukon gold potatoes was a clear winner. This is where the experimenting stopped and the eating began.

For this recipe, I decided to remove the skins of the potatoes. Partly because I recently was gifted a potato peeler and was excited to use it. Im saying this to note that you can either leave the skin on or remove it - your choice! This recipe for Brown Butter Garlic and Herb Mashed Potatoes will be delicious either way!

In a huge pot bring water to a rumbling boil. Add a bunch of salt. Don't worry about the potatoes being too salty, they won't! Boil the potatoes until they are fork tender. Drain the water and then mash! If you have a potato ricer, I highly recommend using that over the potato masher. If you don't have one, don't worry! A masher works just fine, it'll just be a bit lumpy. The ricer just yields a smoother texture to the potatoes.

Brown butter and add to the mashed potatoes along with parsley, rosemary, thyme, and chives. Also add in sour cream and heavy cream, salt, pepper, and onion powder. (I also like to add red pepper flakes but that's just me. I only put the added red pepper flakes on my plate, never in the whole bowl) Mix to make sure that everything is combined and you're done! 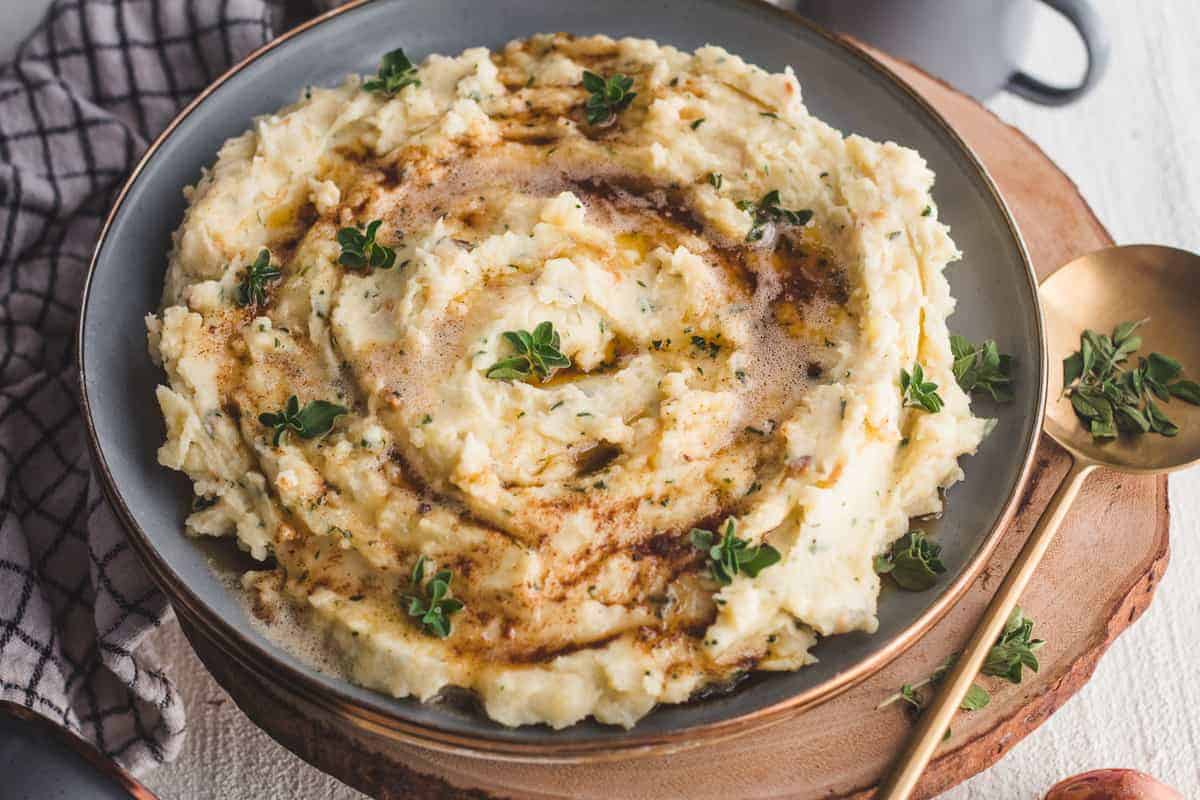