Apple Butter Basque Cheesecake is a crust-less dessert baked at a high temperature with a caramelized exterior and a sweet, creamy center. One slice of this will have you and your guests in complete bliss!

So, you're craving delicious cheesecake? Then you have to check out this Apple Pie Stuffed Cheesecake, Matcha Cheesecake, No-Bake Tiramisu Cheesecake and the Snickerdoodle Cheesecake with Cookie Whipped Cream.

Looks can be decieving

I'm a big fan of cheesecake. Just when I thought I had seen it all, I found out about Basque Cheesecakes! It's a unique take on the classic dessert. I added my own spin to it by incorporating apple butter for a more complex/warm flavor profile. (It also adds some sweetness!)

Apple Butter Basque Cheesecake is a simple recipe that only appears to be involved. Because the point of this dessert is essentially to let it burn, it's a fool-proof method for baking cheesecake. This just might become your go-to dessert!

What is the difference between Basque cheesecake and normal cheesecake?

Originating in the Basque region of Spain, Basque cheesecake’s most distinct feature is its “burnt” exterior. If you peeked at the recipe, you may have noticed that Basque cheesecake has no crust. A natural crust forms because it is cooked at a high temperature. This "crust" is really just a caramelized mixture of sugar, ground ginger, and cinnamon.

However, I can assure you it doesn't taste burnt! It's sweet, custardy, and smooth on the inside. The outer shell forms a crust-like texture that has a caramelized taste from being baked!

Traditional cheesecake is baked low and slow. However, this Apple Butter Basque Cheesecake only cooks for about 50 minutes! It needs no time in the fridge so the cooking and preparation time are much shorter. The end result is a light, airy texture that makes it more the consistency of a souffle than a typical cheesecake that is denser and rich. Serve Basque cheesecake at room temperature.

what is apple butter?

Apple butter is a classic spread that consists of slowly cooked pureed apples. It’s essentially a concentrate of the fruit. The name derives from the consistency of the puree. It spreads like butter, making it the perfect addition to a recipe like this one!

First, preheat your oven to 400 degrees F. Then mix together room temperature cream cheese, sugar and, vanilla extract until smooth. Be sure to scrape down the sides of the bowl as needed. Now add apple butter and continue to mix.

Next add eggs, once at a time. Fully incorporate each egg into the batter before adding the next one. As you continue to mix, slowly add heavy cream in increments of ¼ cup.

Now, in a separate bowl. whisk together flour, cinnamon, and salt. Then mix it into the cream cheese mixture.

Spray a 9-inch springform pan with nonstick spray and pour the batter into the pan. Combine sugar, ground ginger, and cinnamon, and sprinkle on top of the batter. Save a little for after the cheesecake is finished baking. Bake for up to 55 minutes or until the cheesecake is golden brown on top.

Let the cheesecake cool before finally adding the remainder of the cinnamon sugar topping. You can add whipped cream and chopped apples. Enjoy!

This dessert is an absolute must try. With Fall coming up, apple picking season is upon us! You don't need apples for this recipe specifically unless you're making your own apple butter. It's simple, easy, and so delicious. 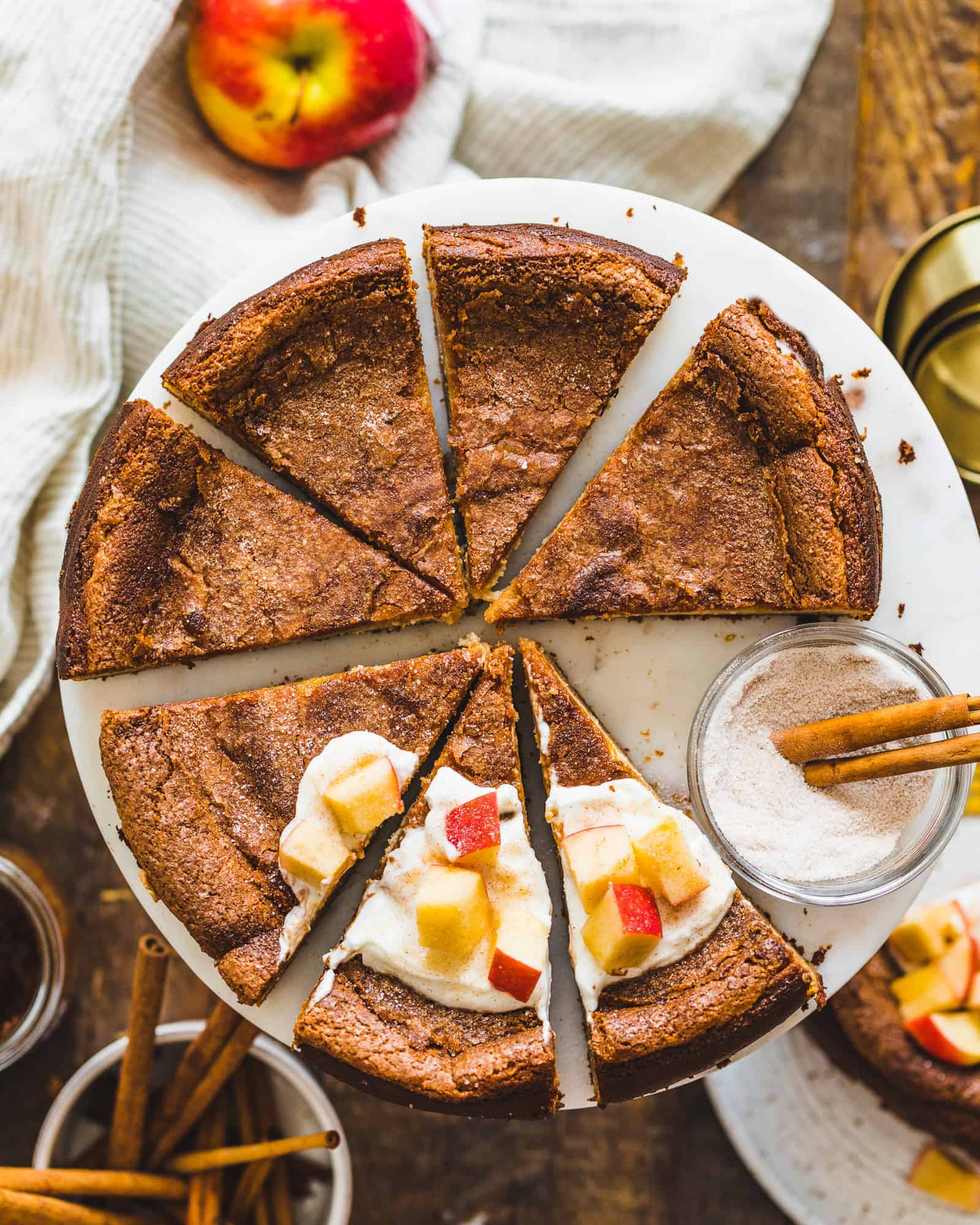 u003cliu003eEnsure that you mix cheesecake batter until all lumps are out and batter is smooth! u003c/liu003e