Vegan Peach Cobbler with Cinnamon Streusel! A recipe that is delicious and perfectly sweet. Buttery biscuits, crispy cinnamon streusel, and syrupy peaches come together and make this cobbler out of this world. Slice up your peaches and gather your ingredients to make this unforgettable recipe!

I'm so excited to release this recipe. It's officially peach season and I'm ready to start baking and cooking with all things peachy keen!

Who doesn't love summer fruit? Especially peaches! I've made sweet recipes with peaches like my Peaches and Cream Churros and even healthy peach recipes like my Peach Cobbler Overnight Oats.

However, this vegan peach cobbler has come to join the party and I think everyone's pretty excited!

I partnered with Califia Farms, using their Oatmilk, for this delicious Vegan Peach Cobbler with Cinnamon Streusel. I used their oatmilk in the biscuit topping then added a buttery vegan streusel loaded with cinnamon on top to create a nice crispy crust!

My favorite part of peach cobbler is always the crust. So, it was imperative that this cobbler have an unforgettable crust. Which I can confirm - it does. The topping is a mix of flaky biscuits and then the streusel comes in to cover all of the peaches.

One baked and browned, the cobbler becomes a masterpiece.

how do you make vegan peach cobbler from scratch with fresh peaches?

This Vegan Peach Cobbler calls for both canned peaches and fresh peaches. I like to use both to add a nice texture to the cobbler! The canned peaches tend to be softer and syrupy.

The fresh peaches, when they cook down, give a nice flavor to the cobbler and are still soft but are a bit more firm than the canned peaches.

The two together make for a really beautiful texture and flavor that's sweet and smooth!

Start with a small bowl. Make the streusel by combining flour, room temperature vegan butter, cinnamon, brown sugar, and a pinch of salt. Simply pinch together until the mixture becomes crumbly and add to the freezer.

In a large bowl, combine freshly sliced peaches and canned peaches for the vegan peach cobbler. Add cinnamon, nutmeg, vanilla extract, salt, melted vegan butter, and sugar and brown sugar on top. Mix together until peaches are coated in the sugar and add to a 9 inch pie pan or cast iron skillet.

Now time to make the biscuit topping. Combine the vegan butter with flour, baking powder, and salt. Pinch together with your hands until the butter is incorporated into the flour. NOTE: You want the butter to be cold! The flour should form pea-sized morsels when the butter was has been fully incorporated. Add Califia Farms Vanilla Oat Milk and continue to mix and knead the dough until a shaggy dough forms.

Knead dough into a rectangle and cut into four pieces and stack on top of each other and press into a rectangle again. Using a 2-inch biscuit cutter or cookie cutter to cut small biscuits out of dough. Repeat this step until all scraps are used. Place biscuits on top of the peaches and bake at 400 °F for 45 minutes. Remove cobbler from oven and sprinkle streusel on top and bake for an additional 20 minutes.

For a tutorial, check out the video below!

This blog post for Vegan Peach Cobbler with Cinnamon Streusel was made in partnership with Califia Farms! I received compensation in exchange for this work. My opinions on their products are genuine. If I didn't love their products, I would certainly mention it! Thanks for your continued support!

As I mentioned previous, I partnered with Califia Farms for Juneteenth. Juneteenth, also known as Jubilee or Emancipation Day, and it commemorates the ending of slavery. I wanted to celebrate by making a Peach Cobbler, but not just any peach cobbler. A vegan peach cobbler that's got a beautifully buttery biscuit topping with a cinnamon streusel on top spiced syrupy peaches.

One spin on this recipe is that it's vegan! I partnered with Califia to bring you this recipe to spread awareness of this holiday as well as a fun way to make classic recipes vegan without sacrificing flavor and texture! I chose to make Peach Cobbler because it is a staple soul food that everyone knows and loves, but also because this dish in particular is a staple soul food that should be celebrated.

Many of the traditional soul food dishes that we all enjoy today such as macaroni and cheese, candied yams, stewed greens, and so much more, were birthed via the creativity of enslaved people who incorporated African cooking methods to make use of the foods that were available to them. There is so much history and beauty in these dishes in that they turned limited availability of food and small rations into delicious dishes that are still being enjoyed and celebrated today.

So, today and everyday, let's enjoy these dishes and pay homage to the rich history that created them!

Let's stay connected on social media and continue to cook together! Also, if you decide to make this recipe, please leave a star rating in the recipe card and leave a comment below! I hope that you love this recipe as much as we do!

Vegan Peach Cobbler with Cinnamon Streusel! A recipe that is delicious and perfectly sweet. Buttery biscuits, crispy cinnamon streusel, and syrupy peaches come together and make this cobbler out of this world. Slice up your peaches and gather your ingredients to make this unforgettable recipe! 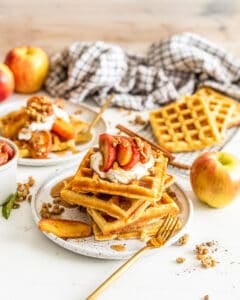 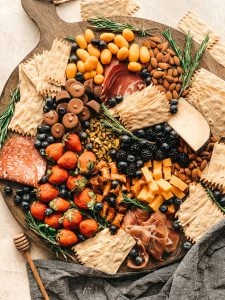 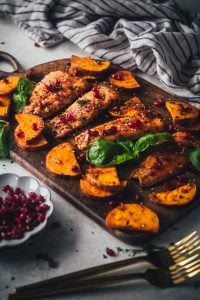 *GOOD NEWS* this week, we FINALLY move into the ho

#AD I partnered with @aldiusa to bring you all of