Roasted Red Pepper and Pumpkin Soup is the perfect soup to welcome the cooler weather that we've been having. It's SUPER easy to make and fairly quick too. Also, it's vegan and gluten-free -making this also a guilt free recipe. In this recipe, you'll find roasted red peppers, onions, herbs, and of course, pumpkin! I also added a few tomatoes for a little acidity.

This soup is creamy and flavorful! It has such a pleasant and warm taste. The roasted red peppers really shine in this recipe. When you add the pumpkins, it adds a really beautiful texture that's almost like velvet. I also added a little coconut milk to build on the tastes and topped with sage and red pepper flakes. It was SO good!

Have you found pumpkin as of yet? Many are mentioning that they've had difficulty finding canned pumpkin in the grocery stores. I, too, had this issue so I went to Thrive Market and ordered it online! I now have more pumpkin than I know what to do with! However, I'm not complaining. It gives me A LOT of room to test recipes and be festive.

As I mentioned earlier, this recipe is pretty simple. There's not a lot involved. In fact, that's one of my favorite aspects about soup - it's super easy to make. Anywho, I started with a large dutch oven pot. I added red peppers, onions, a few tomatoes, thyme, red pepper flakes, a ton of garlic, and salt and pepper to my liking. Then I drizzled everything with olive oil, covered with a lid, and popped in the oven for 30 minutes.

After 30 minutes, the vegetables should be fairly soft. I used an immersion blender to blend the contents of the soup, however, you can certainly use a blender if you don't have one! The result is the same, I simply hate making more dishes than need be. lol Once everything is blended, add the pot back to the stove over low heat and then add the canned pumpkin and coconut milk. At this point, I added a little more garlic and salt and red pepper flakes (I like a nice kick). Simmer for about 5-8 minutes and you're done! So simple and fairly quick. This recipe makes enough to last a few days too!

Enjoy this soup with my savory pumpkin popovers!

My Husband had this with a grilled cheese sandwich and WOW, the combo was better than tomato soup. I was shocked! I hope that you enjoy this as much as we did. If you make this, let me know if the comments or tag me on Facebook or Instagram! 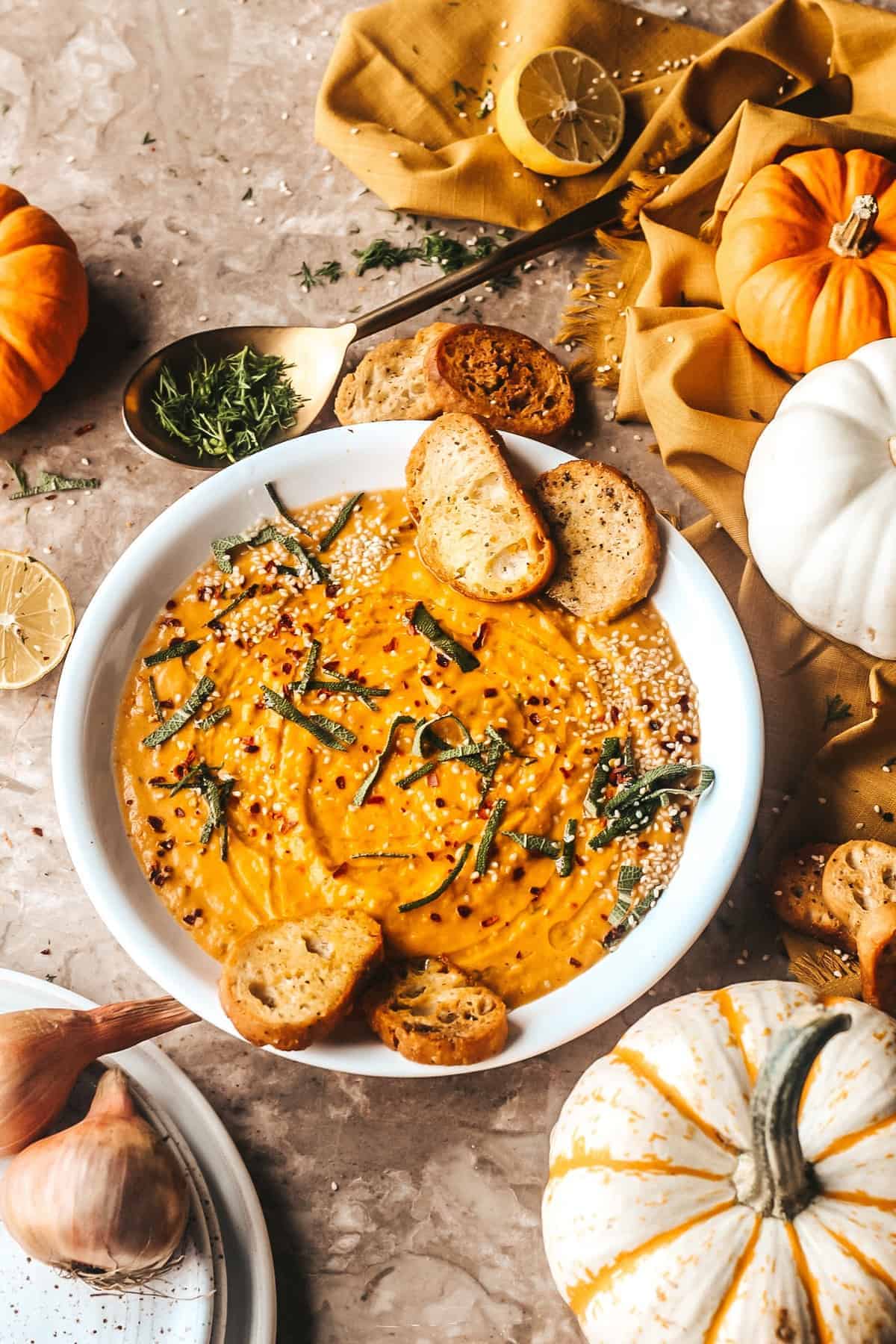 By: Britney
Roasted Red Pepper and Pumpkin Soup is the perfect soup to welcome the cooler weather that we've been having. It's SUPER easy to make and fairly quick too. Also, it's vegan and gluten-free -making this also a guilt free recipe. In this recipe, you'll find roasted red peppers, onions, herbs, and of course, pumpkin! I also added a few tomatoes for a little acidity.
Serving: 8 servings
Prep Time: 5 mins
Cook Time: 40 mins
Calories: 150kcal

want some more soup? check out this recipe!