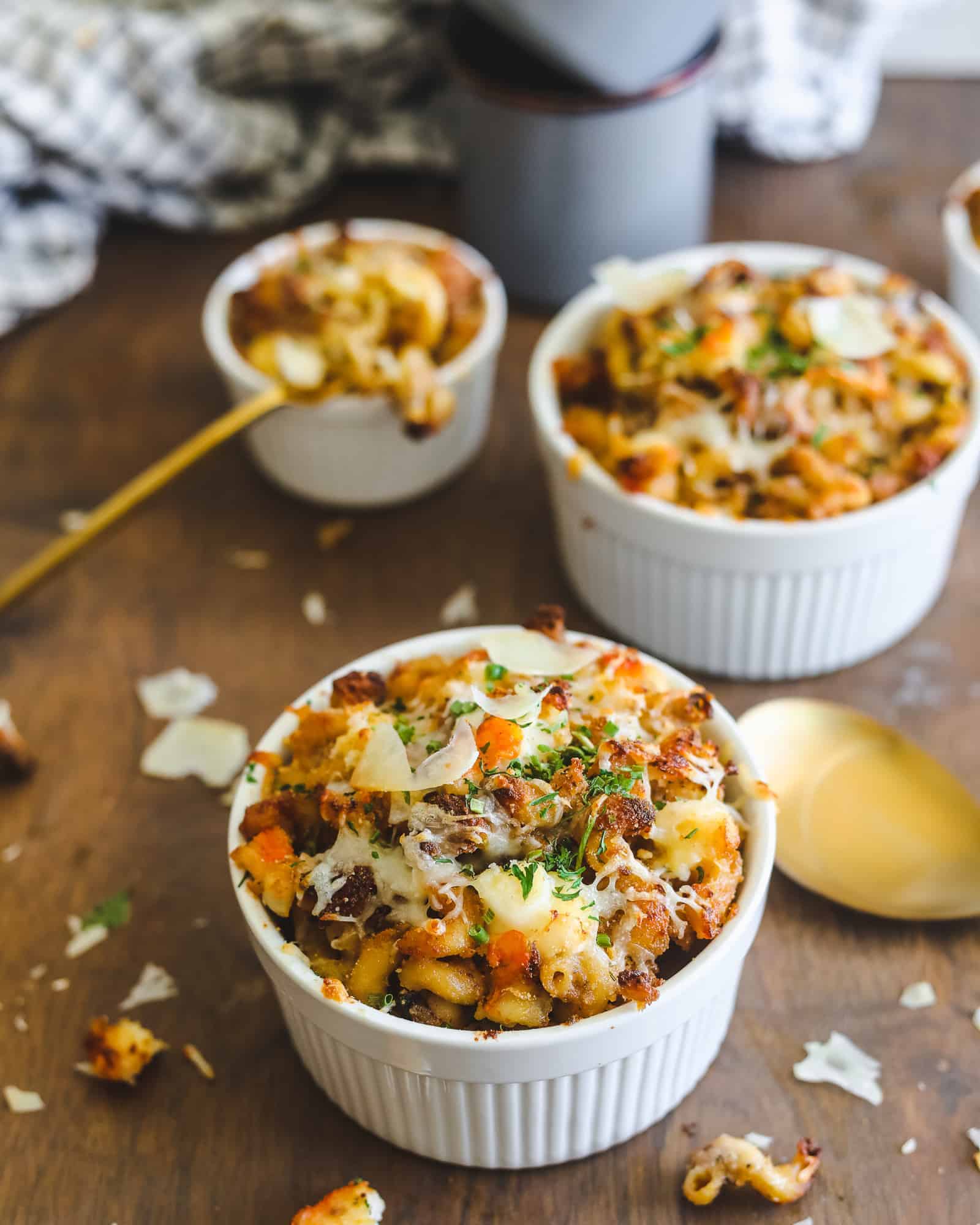 This Old Bay Lobster Mac and Cheese will stop you in your tracks! Cheesy old bay mac and cheese full of lobster chunks, delicious old bay seasoning, and 3 different cheeses that give this mac and cheese it's delicious taste and texture - you can't go wrong!

While you're here, look at this Sausage and Spinach Gnocchi Bake as well as this One Pot Creamy Tomato Pasta with Spinach!

This Old Bay Lobster Mac n Cheese is the dish you need to make. From the lobster chunks to the mixture of three different cheese and the old bay seasoning adding the perfect amount of flavor - this dish is the ultimate comfort food.

If you're anything like me, you know that mac n cheese is one of those dishes that will never go out of style. Whether it's a classic mac n cheese, bacon mac n cheese, even cauliflower mac n cheese - there's nothing like enjoying a big bowl of something warm, cheesy, and delicious. However, sometimes you gotta switch it up a bit! No shade to the traditional Mac n cheese. But let's be clear, I'm ALWAYS down to try something new and mix things up a bit. So, I came up with this Old Bay Lobster Mac n Cheese and it does not disappoint!

Old Bay Lobster Mac n cheese is the ultimate comfort food. It mixes three different cheese, old bay seasoning, and of course huge lobster chunks from Alaskan King Crab Co! The lobster is seasoned to perfection and broiled in the oven with butter, seasonings, and a little lemon juice. The macaroni is cooked then lathered with a deliciously cheesy three cheese sauce that goes perfectly with all of the yummy cheesy glory! I mean you can't go wrong with this one!!

how do you cook lobster?

It's SO easy. First things first, ensure that the lobster is completely thawed out. Use a pair of meat shears/scissors to cut down the middle of the shell to expose the lobster meat. Do not take the lobster out of the shell, just expose the meat. Season the meat and pour butter on top! Then cook in the oven for about 8-10 minutes at 450 degrees ° F.

You don't want the meat to be fully cooked. Just cooked enough so that it's not raw when you add it to the mac n cheese. After it's done in the oven, remove the meat from the lobster shell and cut up the lobster into chunks. Then set aside and move onto making the roux for the mac n cheese 🙂

how do you make old bay lobster mac n cheese?

Before we delve into the recipe, let's talk about ingredients. For this Old Bay Lobster Mac n Cheese, I chose to use Mozzarella, Smoked Cheddar Cheese from my fave Fiscalini Farmstead, and Monterey Jack. I like cheeses that give a good cheese pull so these were absolutely ideal for that.

Now that we've discussed the lobster and the types of cheeses used - let's get into talk about the cheese sauce. The cheese sauce starts as a bechamel sauce turned into cheesy creamy goodness with the addition of heavy cream, old bay, and of course, the cheese. It's buttery, perfectly spiced, and absolutely delicious.

So we begin by cooking the lobster in the oven for 10 minutes. Remove the lobster meat from the shell and chop into chunks and set aside.

Boil the macaroni noodles (I used Cavatappi noodles because I like how they cup the cheesy sauce). I got this tip from my girl Krissy from www.eatingwithkrissy.com! But you can use whatever noodle shape that you like, this is just my recommendation.

While the noodles are boiling, in a separate pan, melt butter over medium low heat and then add flour. Cook together until a slight paste forms. Slowly pour in milk while constantly whisking. Then add heavy cream, old bay seasoning, smoked paprika, cayenne pepper, thyme, and parsley. Oh and a little salt and pepper! Continue whisking until sauce has thickened only a bit. HEADS UP: you're gonna wanna taste as you go with this one to prevent adding too much salt.

Remove the sauce from the heat and add in the cheese! Fold in the noodles and half of the lobster meat (save some for the topping). Pour mixture into a 9x13 baking pan and top with additional cheese and breadcrumbs. Yep, I said breadcrumbs! If you don't like breadcrumbs on your mac n cheese, you are missing out. It adds such a nice crunch!! Then bake in the oven for 35 minutes.

You wanna let it cool for a bit because it'll be like molten lava when you take it out of the oven. But if you can't resist, no judgement here. 🙂 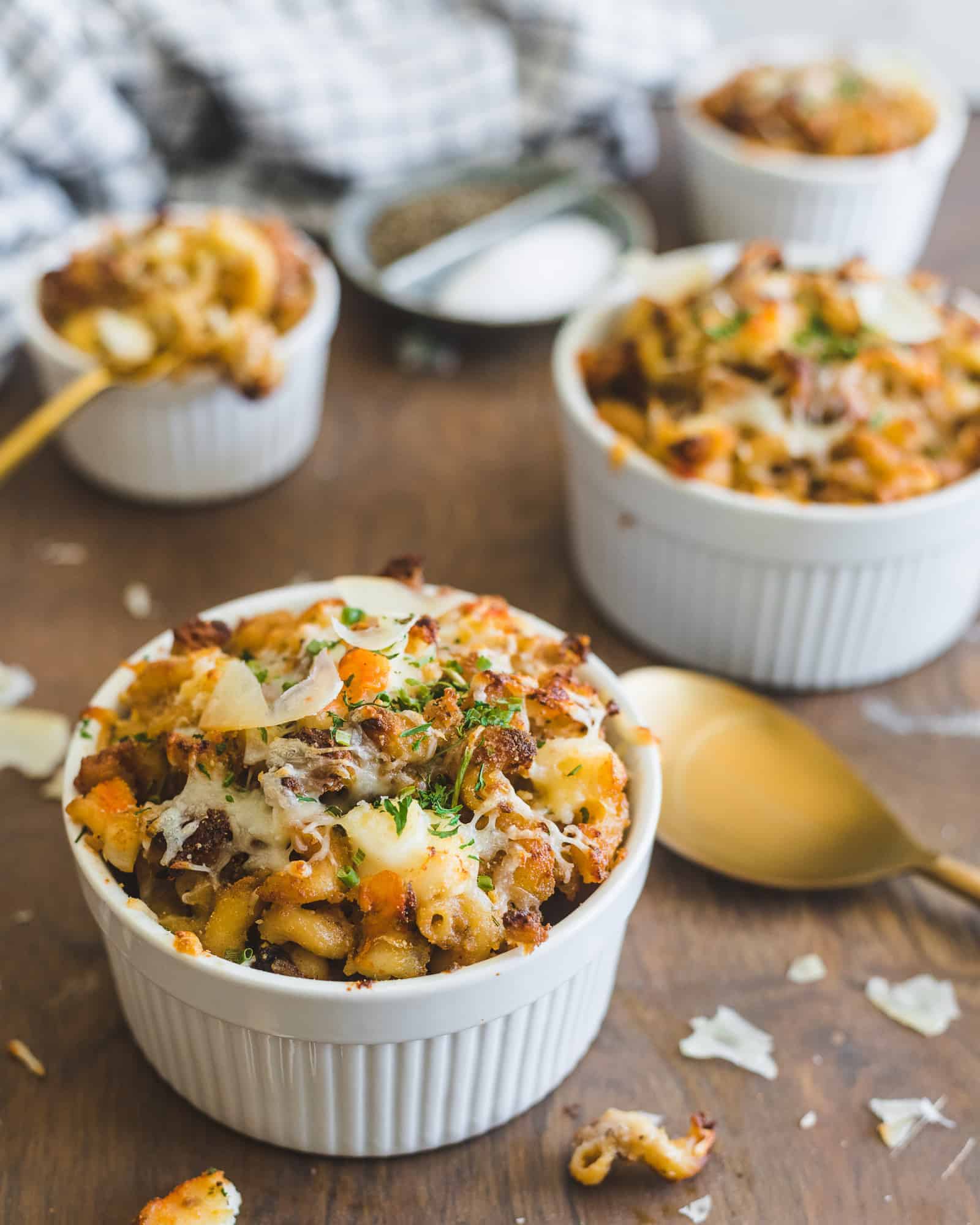 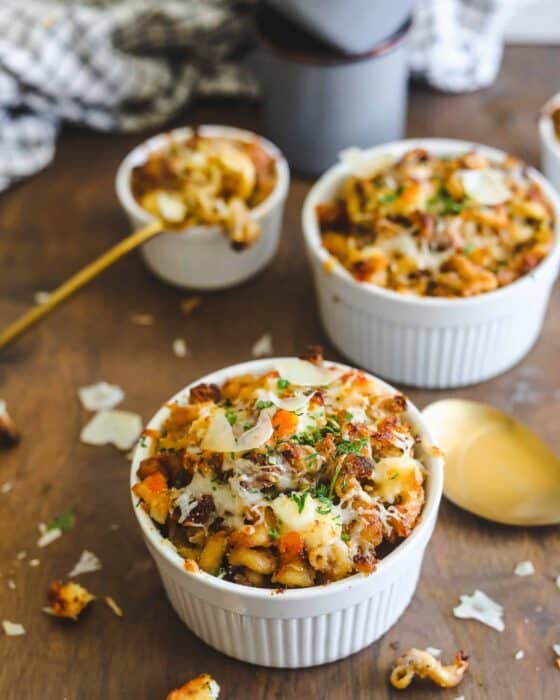