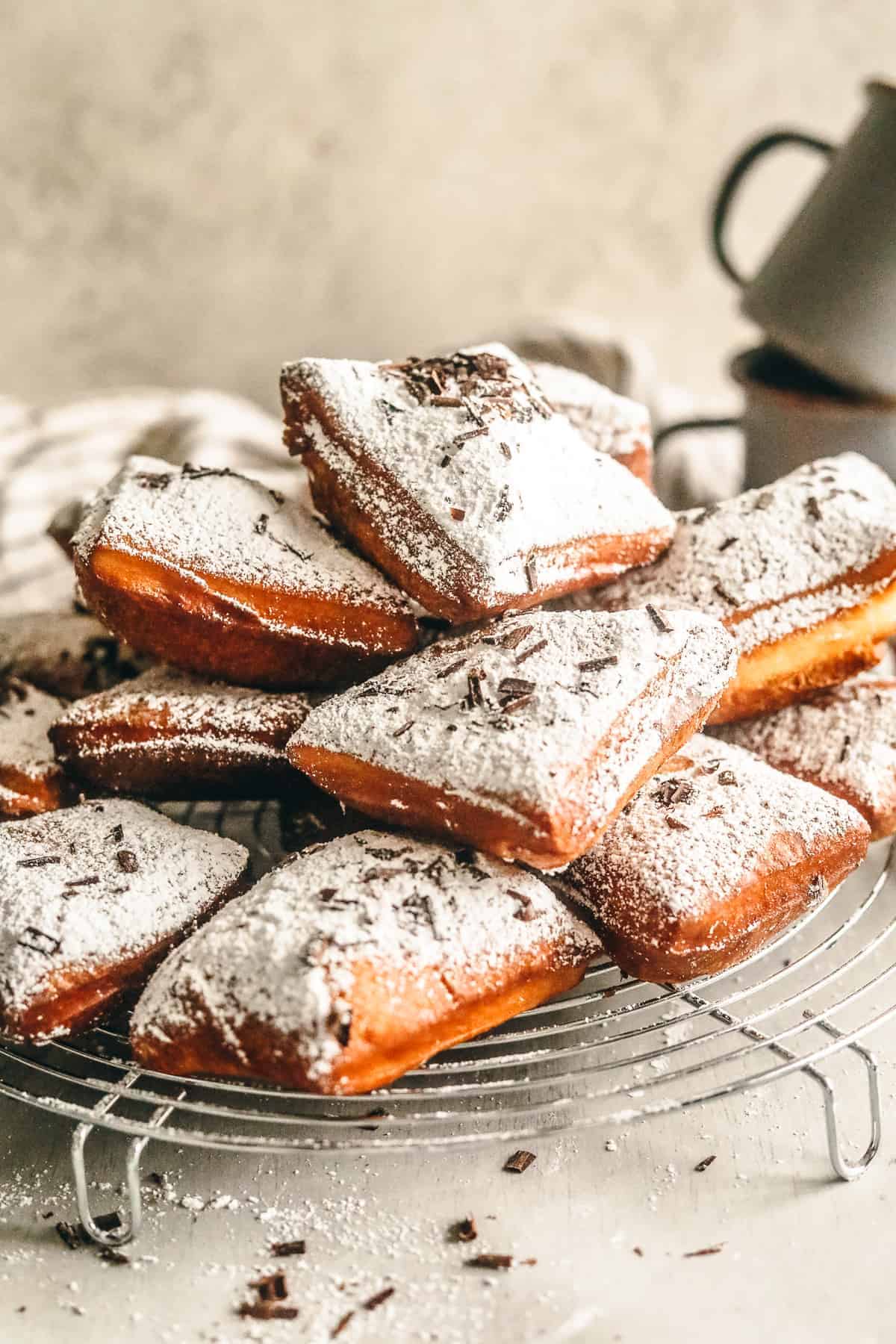 New Orleans Style Beignets are the fluffiest beignets you'll ever have! Smother them in powdered sugar and enjoy with a cup of coffee!

If you love beignets, you have to try these Cinnamon Sugar Buttermilk Donuts as well as this No-Knead Cinnamon Raisin Sourdough Bread!

Who doesn't love New Orleans Style Beignets? Does Cafe du Monde ring a bell? If you've never gone, you're seriously missing out and need to get there as soon as possible. The beignets are simply out of this world. Fluffy, deep fried, and drenched in powdered sugar - what's there not to love? Since it's currently a pandemic and I've not been able to travel, I've been recreating some of my favorite recipes that I've tried around the world - in my kitchen. Hence these New Orleans Style Beignets.

how do you make new orleans style beignets?

For this recipe, I promise it's super simple. I'm here to walk you through the steps (there are not many, don't worry). Since I use active dry yeast, I dissolved the yeast in a ½ cup of warm water and then combined yeast mixture, flour, buttermilk, baking powder, eggs, sugar, butter, vanilla extract, nutmeg, salt, and a little cinnamon in a stand mixer. (FYI - you don't need a stand mixer for this recipe, you can knead the dough by hand. I just use the stand mixer because it's easier!) Knead this for about 5-8 minutes, the dough should come together pretty easily, however, if it's still a little rough, add a teaspoon of melted butter.

Add the dough to a well-oiled bowl and allow it rise until it's doubled in size. At this point, you've done all of the hard work and now it's simply time to wait. Ok, the waiting may be the hardest part honestly, but you're getting closer to your New Orleans Style Beignets! Stay strong!

Once doubled in size, heat about 5 cups of oil in a large pot to 360-380 degrees F. Roll out the dough onto a floured work surface. Use a dough roller/rolling pin to smooth dough into a 12 x 18 rectangle. Cut the dough into squares (whatever size you like). Then fry up the square beignets for about 2-3 minutes, 1-1.5 minutes on each side. Beignets should be nice and golden and should puff up ever so slightly! And there you have it, New Orleans Style Beignets!

how long can you store beignets?

I would say that the only down side of beignets are that they taste best fresh out of the oil. They don't keep very well. Per my experience, they can certainly be reheated (about 10 seconds in the microwave) but they don't have the same texture as when they're fresh out of the oil. But! They will keep for about 3 days... they just taste best on day one in my opinion.

what's the difference between a beignet and a donut?

The ingredients for beignets and donuts are quite similar, however, the quantities differ. This differences in these quantities make it so that beignets aren't as dense as donuts. Donuts tend to have a more dense crumb where beignets are more light and pillowy.

what do you eat with new orleans style beignets?

SO many things! I love eating New Orleans Style Beignets with apricot preserves with a cup of coffee or tea. My husband likes his beignets with a cup of black coffee and tons of powdered sugar. Fresh fruit goes really well with beignets too! You can also eat beignets alone because they're simply delicious. However, simply put - you can truly eat them with anything that you like!

While you're here, you have to try out thee Matcha Beignets and these Cacio e Pepe Beignets too!

pin these new orleans style beignets to your favorite pinterest board!

Let's stay connected on social media and continue to cook together! Also, if you decide to make this recipe, please leave a star rating in the recipe card and leave a comment below! I hope that you love this recipe as much as we do! 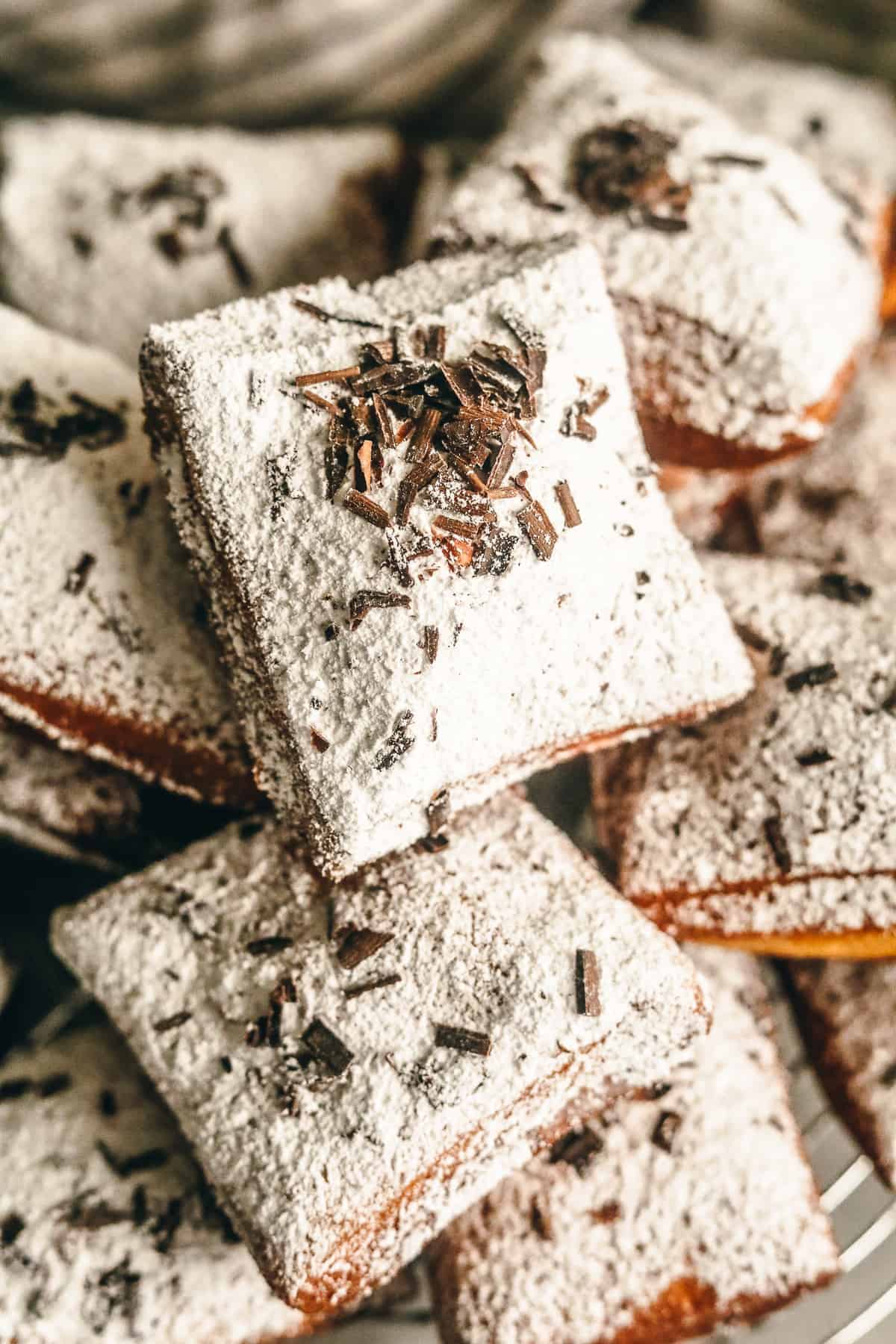 New Orleans Style Beignets are the fluffiest beignets you'll ever have! Smother them in powdered sugar and enjoy with a cup of coffee!
Serving: 20 servings
Prep Time: 2 hrs
Cook Time: 15 mins
Calories: 300kcal 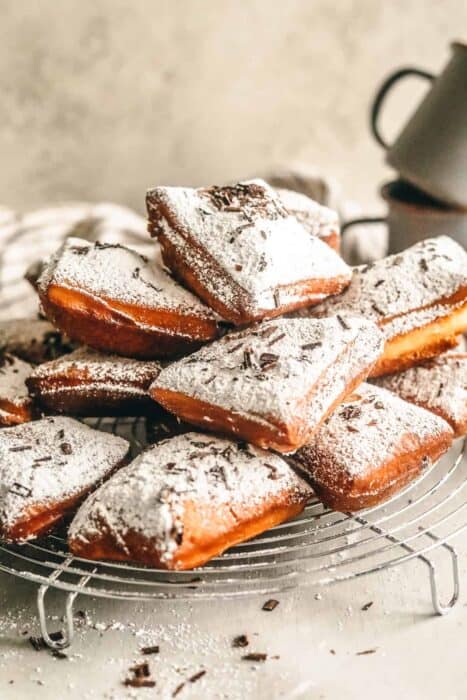