Fresh peaches tossed in brown sugar and cinnamon with a crisp crumble topping - this easy peach crumble recipe is the perfect way to celebrate peach season!

Enjoy this delicious dessert with a scoop of vanilla ice cream and for the ultimate sweet treat!

About a week ago, I picked up a 25 pound box of juicy peaches from the Peach Truck. I just KNEW I wouldn't be able to finish the entire box, but I was wrong.

I've been eating peaches as a snack, with savory dishes, and of course peach dessert... and then there's this peach crumble.

This is a simple recipe but so good. It's similar to a peach crisp except there's no oats in the crumb topping or like a peach crumble pie without the pie crust.

Admittedly, the crumb topping is my favorite part. It's crisp and buttery and just everything that's right with the world.

The peaches are tossed in brown sugar and cinnamon and butter and baked with a cinnamon streusel on top. This delicious crumble is the best peach dessert I've made in quite some time - and I've made quite a few of them.

What I love about this peach crumble is that it's so easy to make. Put it in the oven while dinner is cooking and it's done just in time for dessert. Dollop a scoop of ice cream on top for a decadent dessert! It's peach heaven.

For the simple crumble:

For the peach filling (very similar to peach pie filling):

How to make Peach Crumble

How to Store Peach Crumble

You'll want to store this peach crumble in an airtight container in the refrigerator. It will last up to 4 days. Be sure to allow it to cool completely prior to storing, or else it will become soggy.

Should I use frozen or fresh peaches?

I love using fresh peaches, however, you can use frozen peaches as well! Just be mindful of cooking times. Frozen peaches will release more water than fresh peaches, causing them to need to be cooked longer to prevent the crumble from becoming soggy.

The best way to prevent this is to add a little cornstarch so that the mixture will thicken in the oven. (this recipe does not include cornstarch, but if your peaches are very juicy, add 1 tbsp to the peach filling and toss together with the other ingredients)

This is an easy dessert but you can spice it up however you like!

Should I store peach crumble in the refrigerator?

Yes, you should absolutely store in the refrigerator. I do not recommend storing at room temperature due to food safety concerns.

What's the difference between a crisp and a crumble?

A crumble is almost exactly like a crisp except the topping/streusel doesn't have any oats. 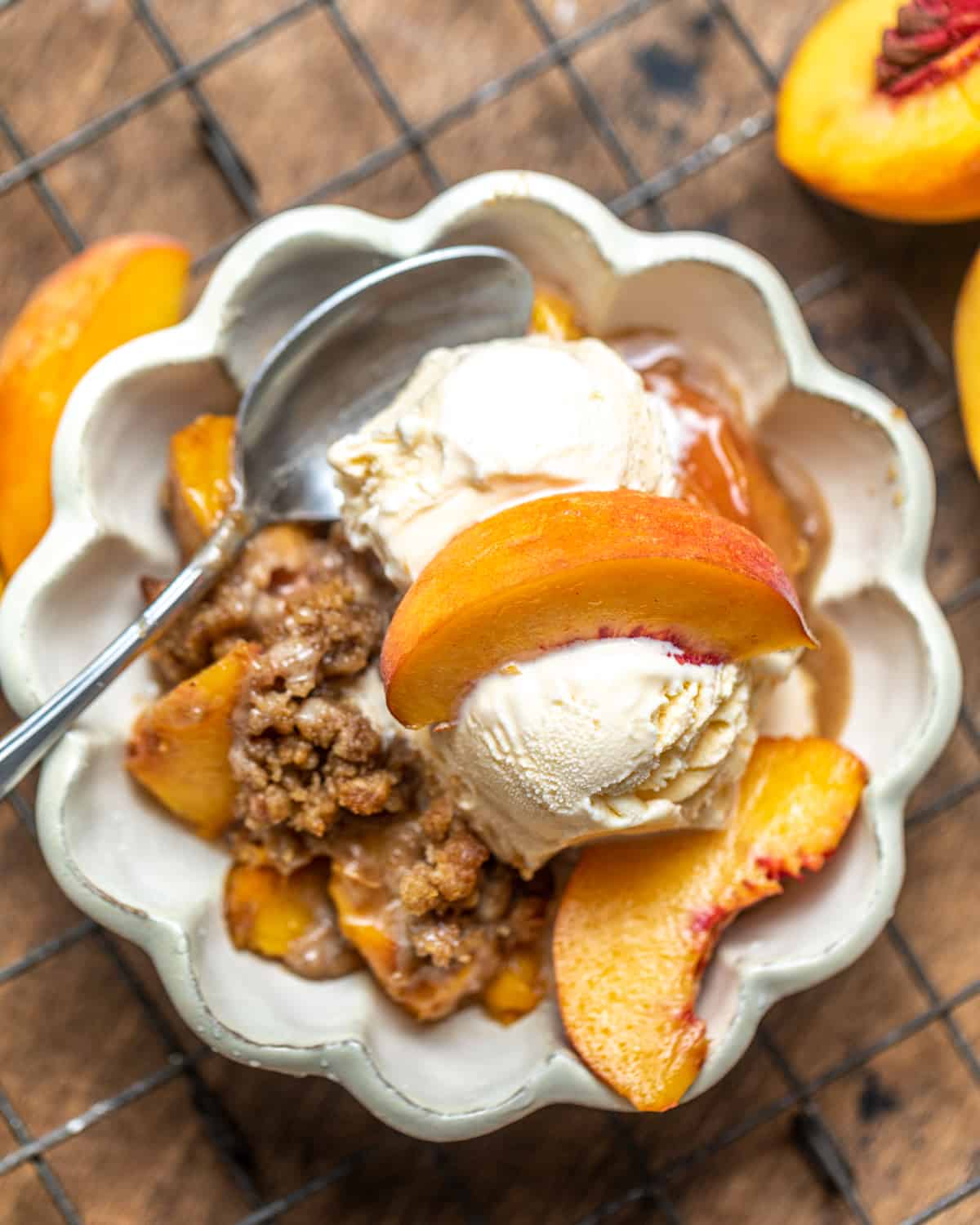 For the crumb topping:

For the Peach filling: