Cherry cream cheese babka! Have you ever thought about experimenting with something? And it was so interesting creatively that you felt that you couldn't rest until you tried it? Well, this is that. I have a running list in my phone full of recipe ideas. Sometimes I'm out and about and I think about a recipe. To remember it, I jot them down to try at a later date. When I thought about this flavor of a cherry cream cheese babka, I was so excited to try it. Because I have a lot of projects going on right now, it took some time to perfect this recipe. Maybe 2 weeks.

I was super invigorated after being outdoors and enjoying being outside without too much worry. So when I got back to the house, I was so excited to give this a try. I combined milk and active dry yeast and waited for it to get all foamy and then added it to flour and sugar, butter, salt, and vanilla extract - you know, the basics. Then set the dough outside on the balcony. My house is always cold. It was so humid outside and I didn't want to have to wait forever for the dough to rise.

Mmm, I waited an hour and checked on the dough and nothing happened. I was pretty perplexed because this has never happened to me before. I automatically assumed the dough was simply taking longer than usual and waited another half hour - still nothing. At this point, I decided to bring it indoors. Then I set it in a warm oven with the oven light on - still nothing.

So I attributed this to a fluke. I started again, at this point it was around 11:30pm, but I was determined. I checked on the dough at 1am - still flat, no yeast activity. So I trash both sets of dough and go to bed. For my third attempt, I bought new yeast and decided that maybe something was wrong with it. Still nothing. At this point, I'm questioning my sanity and if I kept forgetting a step every single time. So, for my fourth attempt I used both a different yeast and a different flour.

I very slowly and deliberately assembled all of the ingredients and results was SUPERB. I made the most beautiful brioche-like dough and truly felt that I redeemed myself. It still perplexes me to this day as to what happened, but mercury was in retrograde at the time and perhaps the baking gods just weren't on my side.

I will state that even throughout all of my baking attempts to perfect this recipe, there's nothing particularly difficult about it if you have patience. Also, if you're kind to the dough. I feel like these are important when baking, specifically bread. Bread can be so fickle and finnicky and honestly, no matter how many times you make bread (any kind of bread), your results are always different. I'm okay with this because I love baking but wow, this recipe sent me for a ride. A fun ride but a hell of a ride nonetheless.

As you can see, I hold this near and dear to my heart because I frequently make recipes where it can take multiple attempts to perfect, but seldom do I ever make a recipe that just completely "fails" like such. It is so true when people say baking is a science because truly it is. I say all of this to say, if you make this recipe, it is a labor of love but it is so worth it. The cherries and the cinnamon and cream cheese with the most beautiful flaky crumb really make all of the steps worth it.

For a savory babka, try this Cheese Babka! 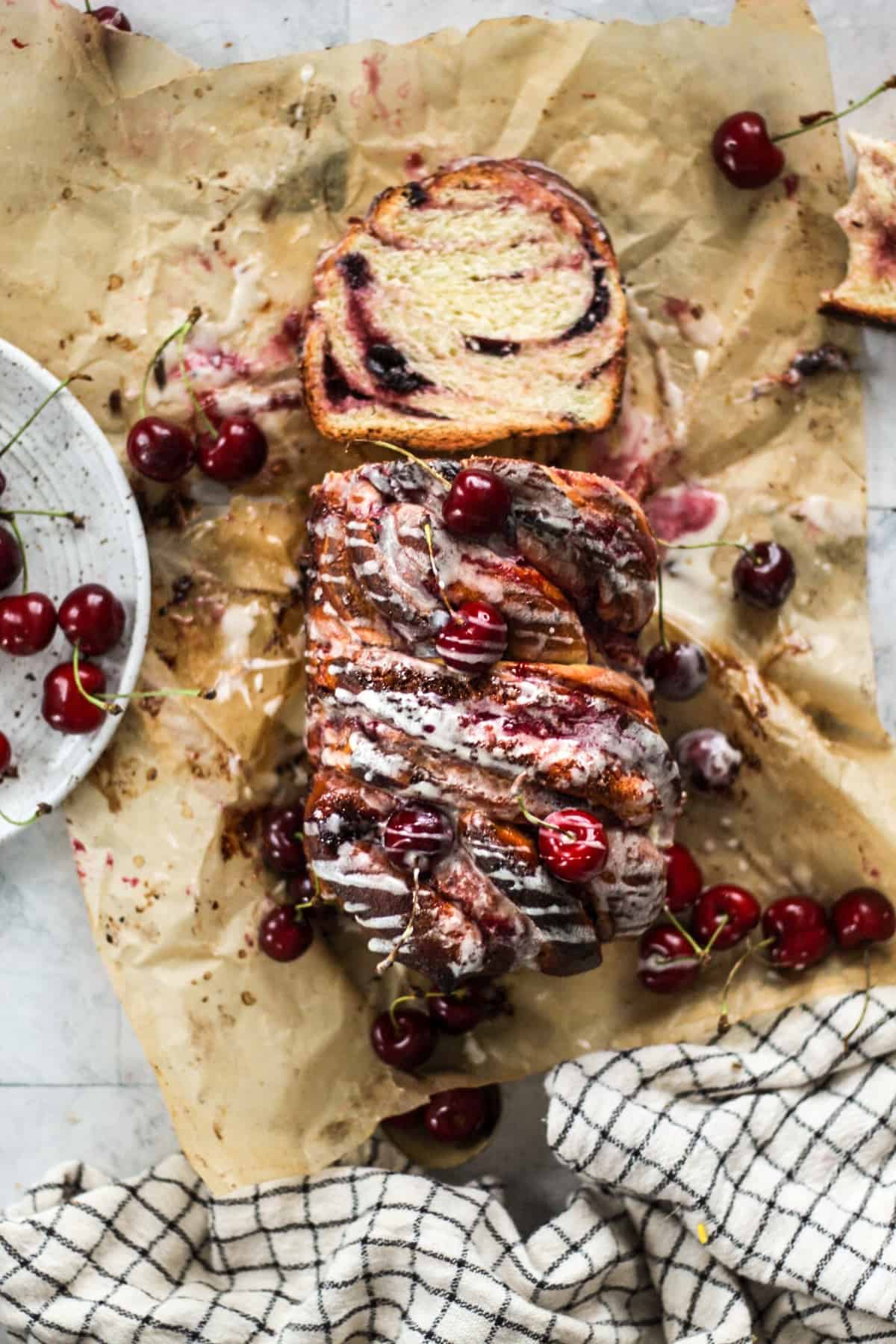